RISE OF THE BIRD MEN 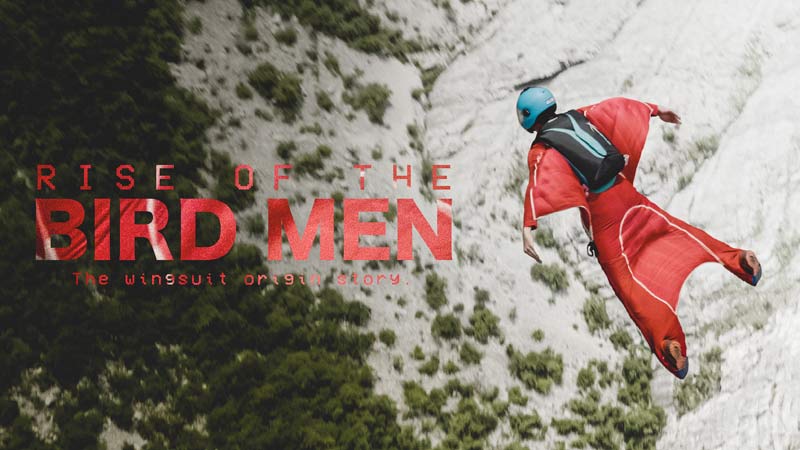 “This is the story of the pioneers that brought raw, un-powered human flight out of the dream realm and made it possible for everyone. A documentary piloted by interviews with the innovators that brought wingsuit flying to the world. An adventure sport in which jumpers utilizing these wingsuits are capable of flying their bodies at horizontal speeds greater than 200 mph (ca. 322 km/h). Now, over twenty years since the first modern day wingsuit was created, we take a look back to see how one of the most captivating human pursuits came to be.

Perhaps flying has always signified escape—a future free from the world’s weight. We dream of soaring among the clouds, of running our fingers through colored beams of light. These are the impossible dreams of humanity. But for the bird men, the pioneers of wingsuit flying, Daedalus’ dream became a reality.”

Wingsuiting has been a huge passion of mine ever since the first video I saw. It was one of those primal feelings, where you just feel it in your gut. I knew I had to experience it. It took me a couple years until I was able to put a wingsuit on and start flying. But once I did, I’ve never taken it off. Naturally, I’m always looking for ways to combine the things I love to do — wingsuit flying and visual arts. Rise of the Bird Men is one of the results of the merging of these passions.
Rise of the Bird Men was filmed in Europe over the course of 12 days. I wanted to film one of the old suits air-to-air in 4K, so I spent a couple days in Italy to film James Boole flying Robert’s seventh wingsuit prototype. Then it was off to France to interview Jean-Noel. Followed by a road trip back east to film the interviews with Robert and Stane in Slovenia. It was a whirlwind of a trip, that’s for sure.
The most difficult aspect of production was being a one-person crew on a quick trip — no time for jet lag, running two cameras, recording audio, hauling gear, driving from country to country, etc. But it has also been very rewarding getting across the finish line in this manner and sharing this story with everyone that is interested. It has also given me a lot of perspective on what each role of the crew involves and what virtues to look for as I build out a bigger crew for the future.